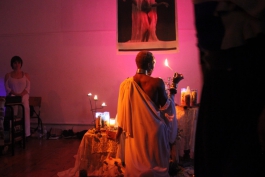 Kopano Maroga interests lie at the intersection of art, social justice and healing knowledge systems. Their current research is in the potential of disidentification and biomythography as tools for destabilizing rigid identity theory. They very much believe in the power of love as weapon of mass construction.

They have worked as a facilitator with the Gender and Sex Project facilitating discussions on gender, sexuality and safe sex practice with high school aged folk. They have also worked as a spokesperson for the urban land justice initiative Reclaim the City.

Kopano Maroga is a Master of Arts student in Live Art, Interdisciplinary and Public Art through the Institute of Creative Arts at the University of Cape Town. They are a performance artist, writer, cultural worker and co-founding director of the independent dance, movement and embodied politics organization ANY BODY ZINE. They have worked with the multiple award winning, contemporary dance company Underground Dance Theatre, award winning contemporary dance choreographers Alan Parker, Celeste Botha, Kristina Johnstone and Jan Wallyn and award winning theatre maker Neil Coppen. They are a recipient of the Kanna, kykNet Fiesta and Woordfees for best supporting actor for their performance in Neil Coppen’s award winning play Buiteland/Newfoundland.

Kopano Maroga was recommended as a participant in the Live Art Workshop at Partout by Jay Pather and is supported by Pro Helvetia Johannesburg.