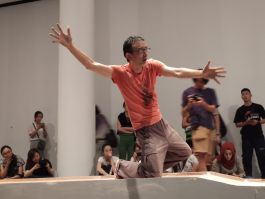 As director, author and curator, Zhao Chuan stands for alternative and socially committed theatre, as in the “Grass Stage” theatre collective that he co-founded. His projects create an open space for intellectual exchange, and his events are free of charge and take place at construction sites, restaurants, auditoriums, etc. He works with lay actors instead of professionals. At the end of the presentations, he invites the public to discuss the piece with the “actors” and “actresses”: the public can ask questions, criticize and even insult, becoming in that way part of the performance. In recent years he has made a name for himself as a director of stage pieces and curator of performance events, but also as a performance artist who presents his works in museums and independent art spaces.

Zhao Chuan regularly publishes in the major newspapers and art press of mainland China and Taiwan. He is a visiting professor at Chinese art schools and at the programme of the New York University in Shanghai. In 2006, he published Shanghai Abstract Story, and two novels in 2003 and 2006, as well as three collections of essays in 1995, 2000 and 2004. He was awarded the famous Taiwanese Lianhe Wenxue (Unitas) New Fiction Writer's Prize and enjoyed many artist's residencies and grants. His theatrical pieces have been performed in Taiwan, Hong Kong and Korea.

Zhao Chuan is a participant of the Live Art Workshop at Partout and is supported by Pro Helvetia Shanghai. For the Acts of Transmission he collaborates with Nathalie Stirnimann & Stefan Stojanivic.