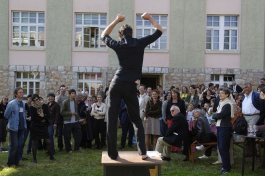 His art concentrates particularly on how the overwhelming mass of TV, computer and mental images, as well as the social codes and other rituals of our leisure-society, thicken the curtain that separates us from reality. At the same time his work never fails to assert human dignity and show to what extent our image-dominated society is endangered. His works "Still in Paradise", "Please, Continue (Hamlet)", "Sound of Music" and "Action", expose the way in which we as citizens struggle with social and political models and activism. By reverting to playful procedures, both "Invisible" and "Virus" deal with the constitution of groups, and therefore with how collaboration and empathy can contribute to empowerment. Co-authorship and collaboration are basic elements of all his projects.

Yan Duyvendak studied at the École Cantonale d'Art du Valais and the École Supérieure d'Art Visuel de Genève. Since then, he has produced a series of creations and performances in venues throughout the world, as in Switzerland, the USA, India, Russia and Hong Kong. In 2002, 2003 and 2004, he won the Swiss Art Award, in 2004, the Namics Kunstpreis für Neue Medien and, in 2006, the Network Kulturpreis. Swiss Art Studio in Cairo (2007, 2008, 2009). In 2010, he was awarded the "Meret-Oppenheim-Preis" and, in 2019, the "Hans-Reinhart-Ring".