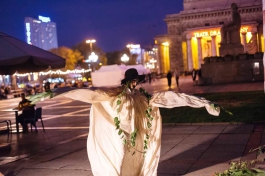 Voin de Voin works in various areas of the visual arts, from performance to installation, integrating into it his research on collective rituals, psychogeography, sociology, psychology and new media. "My work is a combination of performance, installation and social experiment. My goal is to establish new connections between the private and the collective. I would like to establish new thought systems and offer spectators authentic experiences by creating surroundings for the public to participate in activities, games and tasks, in which the boundaries between artist and public are merged and new visions arise".

Voin de Voin holds an MA from DasArts (Amsterdam, NL) and studied at the Gerrit Rietveld Academy (Amsterdam, NL), Goldsmith College (London, GB) and the EICAR–International School for Film and Cinema in Paris (FR). He is co-founder—with Snezhanka Mihaylova—of the Institute for Performance Art and Theory. Voin de Voin has been awarded prizes by the Mondrian Foundation for Visual Arts, Amsterdam (2008) and DasArts Stichting for the Arts (2006-2008). Voin de Voin has been represented by the Galerie Sariev Contemporary (BG) and been directing the independent art space ÆTHER in Sofia since 2016.