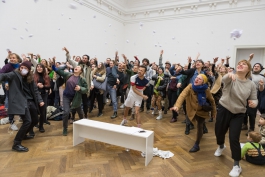 Steven Schoch is a visual artist, performer, choreographer and dancer, as well as a singer and musician. His work is characterized by an interdisciplinary approach and alternates between (video-)performance, theater and installation. His topics deal with our everyday ambivalence and contradictions and investigates their esthetics in various ways. He asks the question how and in whose interest ideas of the world and being in the world are constituted, what powers keep them in place and how a subject or group interprets, experiences and—above all—challenges them. His emphasis is on the investigation of the mechanisms that interrupt such automatisms. "My task is to gently break rules and regulations."

In 2012, he earned a BA at the FHNW HGK in Basel (CH). In 2019, he earned an MA in expanded theatre at the HKB in Bern (CH). Together with friends, he initiated the temporary space "Flatterschafft", a studio facility with a special room for projects. In 2014, he was awarded the grant of the Canton Appenzell-Ausserrhoden, Switzerland. In 2017, he was awarded the grant "DanceWeb" at the Festival ImpulsTanz in Vienna. He was nominated for the Swiss Performance Art Award in 2019. He has had solo and group exhibitions and presented performances in Europe and abroad.