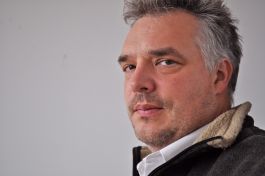 Stefan Sprenger studied fine arts in Lucerne and drawing at the University of Zurich. Since 2000 he has been a freelance writer.

From 2008 to the end of 2013 he served as a member of the Board of Trustees for the Literature Department of the Liechtenstein Cultural Foundation. He is co-author of the play «Am Zug», performed in 2018 by the Feldkirch Walktanztheater.