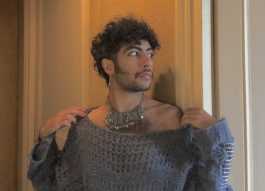 SOROUR DARABI is a self-taught Iranian artist living and working in Paris.

Working actively in Iran, s/he was a part of the underground organisation ICCD, whose festival Untimely (Teheran) hosted his/her work before his/her departure for France.

During studies at the CCN de Montpellier s/he created the solo Subject to Change, a performance that questions transformation with regards to time and one’s cohabitation with an environment.

In 2016, s/he created Farci.e, a solo dealing in notions of language, gender identity and sexuality, at the Festival Montpellier Danse. In 2018, s/he created Savušun, an ode to affect, to vulnerability, and to beings who are affected, is inspired by the grieving ceremonies of the Muharram and deals in questions of emotions: grief, fear, and suffering. In 2020 an 2021, s/he is working on Mowgli and Natural Drama, two new solos.

For the production, the development and the touring of his/her projects, he collaborates with Météores a choreographic production platform based in France.

Sorour Darabi was invited by Vicky Shahjahan to Acts of Transmission as a participant of the Live Art Workshop at Partout and is supported by Pro Helvetia New Dehli.