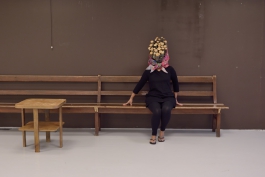 Pavana Reid is active as a performance artist using performance photography and film formats, both solo and in collaborations. Starting from the complexity of individual and collective identity, she examines these concepts in terms of a continually changing unity, as a continuous process in broader representations of social norms. Her performances and her actions are narratives that combine with the mental representations of the spectators to become new personal experiences. Reid's performances often take place in public spaces as site-specific performances and also often include artists whom she invites to work with her on specific issues and contexts.

Pavana Reid relocated in 1988 from Thailand to Northern Ireland during the period of long-standing political unrest. She earned a BA in the visual and applied arts at the Ulster University, Belfast (GB). In 2020 she curated HOUR, the international performance festival in Bergen and is co-organizer of the Open Session events 2019-2021 for Performance Art Bergen.