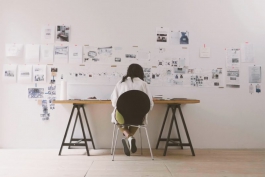 Noor Abuarafeh, b. 1986 in Palestine, lives and works between Jerusalem and Cairo.

Noor Abuarafeh works with video, performance and text. Her projects deal with memory, history and archives and the possibility of tracking down absences. Noor's videos and performances are based on texts and call the complexity of history into question: how it is formed, constructed, made, perceived, visualized and understood. She asks how all these elements are related and investigates the possibility of representing the past when there are gaps in the documentation. Her videos and socially-engaged works are based on interviews, workshops and other participatory activities.

Noor Abuarafeh holds an MA from the ECAV (CH) and a BA from the Bezalel Academy for Arts and Design, Jerusalem. In 2016, she was one of the finalists for the Emerging Voices Award and was awarded the second place in the Young Palestinian Artist Award of the Qattan Foundation. Recently Noor participated in the following exhibitions: Sharjah Biennale 13 (2017); Off-Biennial—Gaudipolis, Budapest (2017); Qalandia International, Jerusalem (2016); INTERMOLECULAR SPACES, Aalborg (2016); Suspended Accounts, Mosaic Rooms, London (2016); Instant Videos Festival, France (2015); Salt and Water, Or Gallery, Canada (2014); and Tokyo Wonder Site, Japan (2013).

Noor Abuarafeh is a participant in the Live Art Workshop at Partout and is supported by Pro Helvetia Cairo. For Acts of Transmission she collaborates with Samuel Georgy.