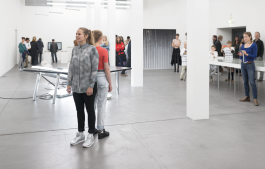 Martina-Sofie Wildberger, b. 1985 in Zurich (CH), lives and works in Geneva and Zurich (CH)

In her work, the artist Martina-Sofie Wildberger gives texts a form in space and, as such, thematizes the political aspect of poetic expression. In her performances, she concentrates on the sound components of the spoken text as a material and puts them into French, English, German and Swiss-German so as to explore the emergence of meaning.

In concentrating on communication, understanding and issues of translation and translatability, she observes the conditions for the transmission of a message, the elaboration of a personal language and the political dimension of the speaking of one language instead of another. In addition to that she reflects on the role of the person who is talking, whether through a reading by the author or a third party, or by means of a complex performance, which includes the voices and movements of several actors in specific spatial arrangements.

Martina-Sofie Wildberger studied art history and German literature at the University of Geneva and art at the Haute École d’Art et de Design (HEAD) in Geneva. In 2019, she was awarded the Manor Art Prize in Schaffhausen, in 2018, the Bourse d’Aide à la Création of the City of Geneva, in 2015, the Kiefer Hablitzel Prize and in 2012, the Swiss Art Award.