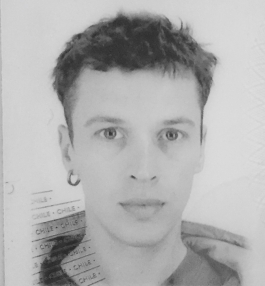 Domingo del Sante graduated in Performing Arts from the Universidad Mayor. He has trained with different teachers such as Tomislav English (UK) and Rasmus Ölme (SE). He has worked with choreographers such as José Vidal, Francisca Morand, Nury Gutes, Joel Inzunza and Eduardo Zúñiga.
As a dancer he has participated in international festivals such as the Holland Festival and the Wienwoche (Vienna).
In 2014 he participated in a Mil M2 residency with Trinidad Piriz and co-directed the work ITHACA which was presented at the GAM, M100 and the Santiago a Mil Festival.
In 2017 he was awarded the national call to be a NAVE resident and received the NAVE-Mustakis grant to carry out his research in the work The Plant's Society.
2018 he was invited b NAVE to participate in the MOVIMIENTO SUR in Santiago and Valparaiso (Chile) and in the festival Opera Estate (B-Motion) in Passant del Grappa (Italy). From 2017 to 2019 he worked as a dance teacher in the acting career.

Domingo del Sante was invited by Maria Cifuentes to Acts of Transmission as a participant of the Live Art Workshop at Partout and is supported by Pro Helvetia COINCIDENCIA.