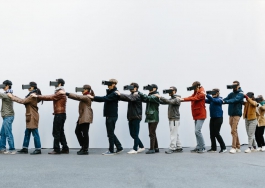 In 2015, they found Coupé Décalé, a collective bringing together their respective disciplines : dance, cinema and anthropology. Coupé Décalé grows into a laboratory, an experimental curation project, a dialogue in between arts and research.

Coupé Décalé invites artists, theorists and audiences to exchange and dialogue over a selection of works around topics developed in different cycles. The selection pays particular attention to movement, body and gestures in the context of aesthetic, cultural and/or social approaches.
This project proposes a dialogue between the local and emerging artistic scene and artists of a wider recognition by putting their works in resonance and by occasionally inviting them to collaborations and/or creations in situ. Nomadic, Coupé Décalé invests a diversity of spaces - artist’s studios, theaters, art centers, walls, gardens, spaces for creation and alternative lifestyles-

Justine François studied anthropology at the ULB. in Brussels, specializing in visual anthropology and documentary film at the SIC in Brussels. Her first film, “N’doki, Sparrows of the streets”, came out in 2015. Her work takes place at the interface between dance and anthropology.
Maïté Jeannolin studied at PARTS (School for Contemporary Dance) in Brussels and works as a performer with various choreographers, and visual and video artists. She is interested in multidisciplinary approaches between collective research and creation.
Charlotte Marchal is a camerawoman and filmmaker with a diploma from the INSAS (Institut Supérieur des Arts), Brussels. She is a member of the video-collective “Cold Blood”—founded by Michèle Anne de Mey, Jaco van Dormael—and the collective “Kiss and cry”.